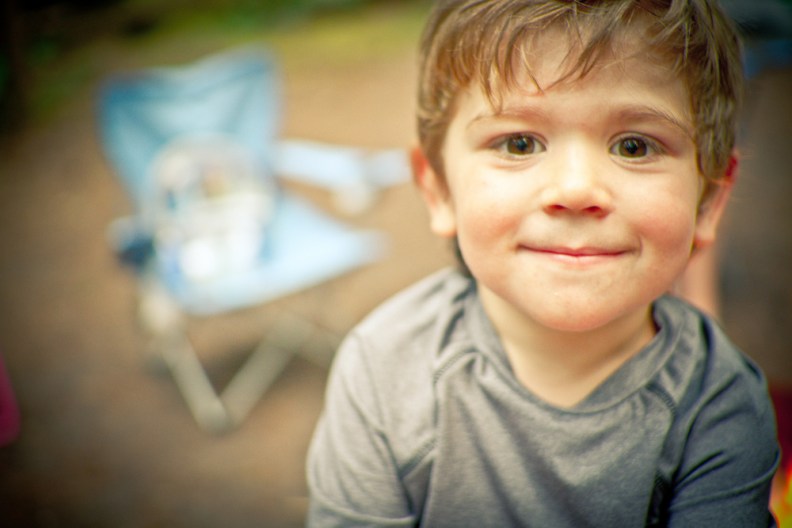 This is the kid whose clothing phases have included:

He still wears his underwear backwards.  It results in a lot of wedgies, skidmarks and plumbers crack.   I let it go almost completely, although every now and again I mention that he might be more comfortable if he wears them the other way, to which he replies, “I will tomorrow”.

The reason for this preference?  He wants to be able to easily see the superhero emblazoned boldly on the back of his undies.  It really might actually be a smart move.  Too bad he has to make his mother crazy.

So, last week was back to school (preschool, technically).   Fortunately, other than the backwards undies, his only real clothing preference right now is that he’ll only wear shorts.  I mourn for the drawer full of super cute “little man” pants from h&m with buttons and suspenders and patches oh my, but I got smart and just bought a truckload of shorts with elastic waistbands from Target (we can talk about buying “local” and “sustainable” another day – when one has to buy shorts in bulk that will only be destroyed or outgrown in short order, one must learn to compromise).

We knew that Back to School week was going to be hard.  Our second son, Rowan, was to be born this summer, and we had spent our pregnancy anticipating the commencement of preschool in the fall as a marker of normalcy and routine that would be welcome after the chaos of summer vacation and adjusting to a growing family.  When we lost our son in childbirth, our lives really fell into chaos.  I instinctively knew that Aiden’s first week back at school would be very difficult as I would be faced with the emptiness of each moment that Rowan was so eagerly expected to fill.

But what we didn’t count on was that returning to a routine with mom at the center would be such a challenge for Aiden.  He had spent the last several weeks with dad taking on the primary caregiver role, and a constant flow of family members in our home to help pick up the slack and keep him entertained throughout the day.

I told Chase, a few days before school started, that I was ready to go back to the routine, which meant waking up with Aiden in the morning, making breakfast, getting ready for school, etc.  The next morning, we resumed our old roles.

And basically, Aiden rejected me.

I didn’t expect it.  I wasn’t ready for it.  I was so hurt – it felt as if his reaction was more unfair than even our recent loss.  He didn’t want anything to do with me – would say hurtful things, be rude and aggressive, ignore me and constantly ask for his dad instead.

A great deal of reflection (and conversations with my therapist and close friends) have helped us to wade through the last couple of weeks and find each other again.  I’ll probably never understand exactly why he reacted this way.  But we’ve learned through experience the last few months that Aiden struggles with transition, and we were foolish not to sense that this would be a big one for him.

If we could do it again, we’d probably do things a little differently.  We’d probably make a more gradual transition, maybe having me get up in the mornings with the boys while they continued their routine for a few days and slowly taking over some of the tasks.  We’d probably talk to him about the upcoming changes a little more.

I’ve also learned that while yes, we need to find our daily rhythm and that certain things are non-negotiable (like manners or washing our hands), that the way back into his day and into his heart wasn’t by being the tyrant that had more expectations of him than all of his caregivers for the last few weeks combined.  It would be by gentleness, lots of time together, patience and a few extra snuggles at bedtime, and more than a little respect and space offered as recognition of the new way of life he’s needed to find in my semi-absence.

This week went better than last.  I’m proud of us, of him, of our whole family.  I think we’re going to make it.

4 thoughts on “Back to School”